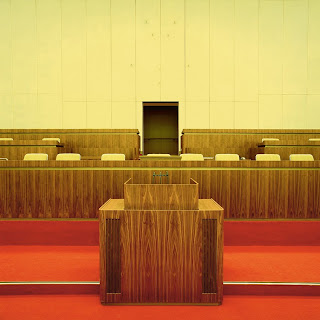 "The building was completely sealed," said Klapsch, "so an utter stillness lay over everything. It was a strange feeling." (Spiegel Online, 2010)

The photographer Thorsten Klapsch deliberately delayed publishing his Palast der Republik photographs until the demolition was completed, to avoid being seen as a "political gesture" (Spiegel Online, 2010). 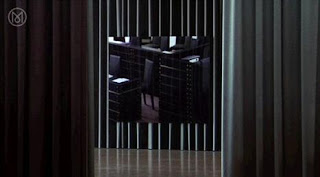 Thomas Demand creates "a strudel of putting sculptures and photographs and concerns of painting into one" by constructing life-size scenes to photograph. He talks about his exhibition National Gallery which coincides with the anniversaries of the foundation of the Federal Republic of Germany and the opening the Wall, "two pivotal historical events in German history" (This is Tomorrow, 2009). Focusing on the collective memory of Germany, Demand describes his intention to capture "society falling apart and a new one forming" (Demand, in Bound, 2011) through a raided Stasi office. 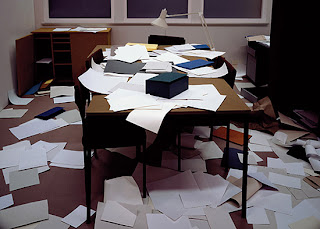 "The tacit nature of this work's Germanness is striking. Imagine walking through an exhibition by Joseph Beuys devoted to the idea of the German nation without having to notice that this is the theme. Impossible. For Gerhard Richter, even more impossible. With Sigmar Polke, Hanne Darboven, Anselm Kiefer, Isa Genzken or Martin Kippenberger--for any of the photographers of the Becher school, too--a reflection on Germany and the traces of its history in the present could only be patent, unavoidable. Is this Demand's lesson: that Germany is now no different from anyplace else, that it is at last a normal, self-confident European nation like any other, unburdened of the memory of its historic tragedies, free of the guilt and resentment that have weighed so heavily on Demand's precursors? Has the effort of Vergangenheitsbewältigung (coming to terms with the past), a process as cumbersome as the word, been completed, or has it simply fizzled out?" (Schwabsky, 2009)

"...What counts as destruction, and what counts as 'ours,' depends on your viewpoint. In 2002 the German Parliament voted to demolish the Palast der Republik, the grandiose seat of the former East German Parliament... It had been closed since 1990, and the idea was to replace it with a replica of the kaiser's castle that had once occupied the spot. The German Parliament sought to efface part of Berlin's living history in favor of sham historicism. Nothing that belonged to the GDR, according to powerful elements in Germany today, could possibly be 'ours.'" (Schwabsky, 2009)

Bettina Pousttchi in 2009 created a photo installation of Palast der Republik on the facade of Temporäre Kunsthalle Berlin, a temporary gallery built where the Palast once stood. In her interview, Pousttchi talks about different times represented by two clocks, and her focus on media reality rather than factual reality. Pousttchi also notes that the Palast had changed its meaning after the fall of the Wall, to symbolising "reunified Germany and Berlin" (Pousttchi, 2009). 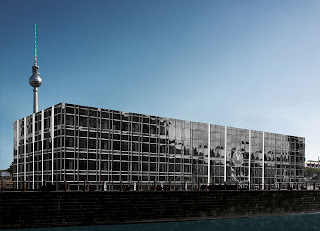 Christoph Niemann on politics of immigration 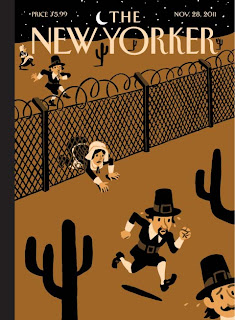 "Too often in politics, very complex subjects are being turned into sound bites, so it’s easy to take them apart" (Niemann, in Kaneko & Mouly, 2011).

To provide context and "to help keep things in perspective" on immigration debate in America, Christoph Niemann drew "a parallel between current immigrants and early settlers" for the New Yorker magazine cover. The artist also claimed, "cartoonists, not politicians, should be the ones who condense political discussions into simple images"  (Niemann, in Kaneko & Mouly, 2011). 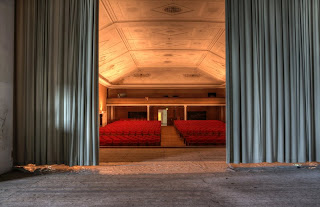 In 1994, the population of Wünsdorf decreased from 60,000 to 6,000 as the Russian forces left. The town once hosted the headquarters of Soviet forces in East Germany, and was "a Soviet city in the heart of Germany" (Rüger, 2011) but is now forgotten.

"Walking around the empty rooms, halls and corridors, it takes some imagination to picture this rambling, deserted complex filled with thousands of people... The light falling on the faded pastel-colored walls and on the flaking paint of the doors give this military architecture a nostalgic atmosphere. Here and there, one finds objects left behind, such as a broken piano lying in the dust, its legs removed." (Rüger, 2011)