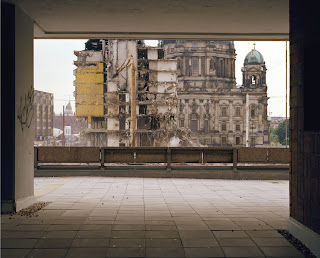 Excerpts from Brian Rose's journal, who captured images of East/West European borders. In 1990 he was on his way back to Berlin to photograph the aftermath and what once was the Wall.

Memories back in the USSR

Boris Mikhailov, born in Ukraine made his series At Dusk in his hometown of Kharkov following the collapse of the USSR, using twilight to "record a society in transition and to evoke childhood memories" [V&A, 2012]. The monochrome photographs tinted blue refer to the 'blue hour' of twilight. The artist had been developing "a visual cosmos" since 1960s when photography was controlled by strict rules, which Mikhailov turned away from and focused on the private and the personal (Barbara Gross galerie, 2007).

Overlapping motifs and leading multifaceted interpretations, Mikhailov hung social issues and living situations are disguised. The montage of images of opposing meanings reveal "contradictions and ambivalences in Russia in general" with layered "motifs featuring shots of surfaces that have been exploded or are crumbling is symptomatic for the collapse of Soviet society" (Barbara Gross galerie, 2007).

Looking back, Mikhailov notes that it was a period of "hidden meanings and coded messages in all genres... Given the scarcity of real news, everyone was on the lookout for the smallest piece of new information, hoping to uncover a secret or read between the lines. Encryption was the only way to explore forbidden subjects such as politics, religion, nudity" (Mikhailov, in Fredrickson, 2008). 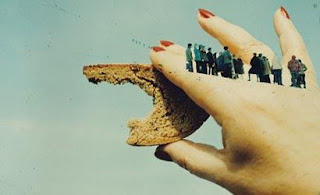 Beyond singular point of view 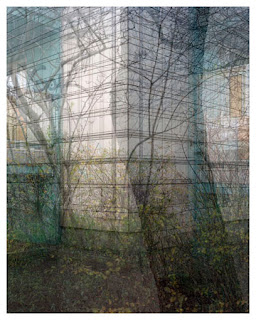 Isidro Ramirez explores limitations in photography, that it can only see the surface, by layering photographs from four sides of East Berlin buildings. Ramirez attempts to view "a place in its totality" and questions, "would I know more if I saw this building from all different angles?" (Ramirez, in TroikaEditions, 2009)

Laurent Dequick similarly layers multiple photographs, as he argues there is no single frame of photograph that could capture "the streets, the lights, the sounds, the traffic, the swarms of people, the mixture of smells" in post-Wall Berlin (Dequick, in Weidmann, 2012). 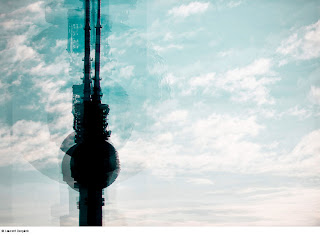 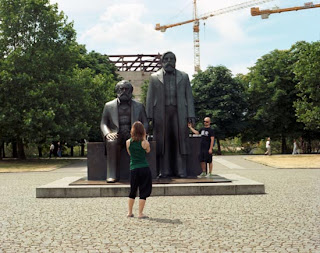 Photographer Warren Naidich notes that the opening of the Berlin Wall delivered immediate and long-term consequences: "this once important monument depicting two famous philosophical figures has become nothing more than a backdrop for staged photographs by tourists visiting the city elucidating the ideological changes that have resulted form the fall of Communism and the rise of Capitalism" [Neidich, 2012b].

Neidich created a series Marx and Engels (2008-09) from photographs he took between 2008 and 2009. Installed in 1986, the Marx and Engels statue has moved about in Alexanderplatz, and can be seen in his series as a tourist backdrop with the disappearing Palast der Republik. He has also created an installation Undoing the Palast der Republik (2007) capturing the Palast being demolished. 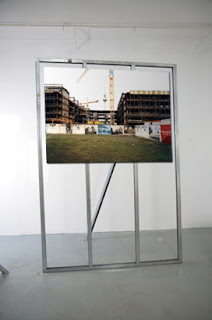 For the Black Square, Triangle, Circle Fragment 2 (2007), which he describes "a series of performative sculptures that reenact the memory of itself as a fragment of a once enacted performative space," Neidich states that "altogether the undoing of the Palast is metonymic for the process of undoing of Architecture as a cultural act. The Palast was not demolished but is being slowly and meticulously taken apart. The cultural undoing, assimilation and subsuming of the communist block by Capitalism after the fall of the Berlin is re-enacted in this work" [Neidich, 2012a].