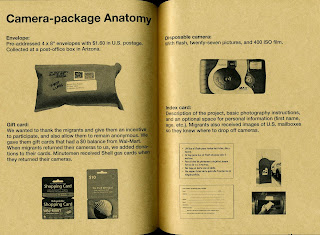 The Border Film Project handed disposal cameras to migrants and minutemen volunteers on the U.S.-Mexico border. The project has received 73 cameras: 38 from migrants and 35 from minutemen, and nearly 2000 photographs [Border Film Project, 2010]. There is a similar project taking place at the South Africa-Zimbabwe border also.
The Project is an art collaborative of undocumented migrant workers on one side of the border, and minutemen who are trying to stop the workers from entering the U.S. Visits to humanitarian aid groups and shelters on the Mexican side were approached to recruit migrant photographers. This process included showing the photographers what postboxes looked like in the U.S., so that they were able to send the disposal cameras back to the project.
Although the groups on each side of the U.S.-Mexico border have different interests/stakes, both sides have a common view, that they are documenting a situation which should not be happening.
Border Film Project [2010] Photos by Migrants & Minutemen on the U.S.-Mexico Border. [online] http://www.borderfilmproject.com/en/index.php [03/03/2010]
Adler, R., Criago, V. & Huneycutt, B. (2007) Border Film Project. New York, N.Y.: Abrams.
Posted by Tomo Usuda at 19:38
Labels: border, Border Film Project, Collaborative, Mexico-USA, photographs
Newer Post Older Post Home