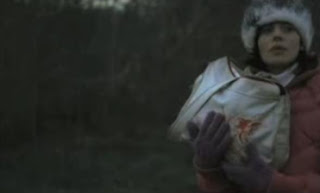 
Otjesd (Отъезд) is a short film by Clemens von Wedemeyer, focusing on the immigration of Russians to Germany, an increasing phenomenon seen after the opening of the Berlin Wall and the changes in Eastern Europe. The 15 minute film is filmed in a single shot - and was shown as a continuum at the Kunstmuseum Stuttgart - capturing "an imaginary scene of people waiting for visas in front of the German consulate in Moscow", with the camera follows a young woman trying to enter the building [UbuWeb, 2010]. The Russian dialogues in the original film are "not dubbed or subtitled, creating for the viewer an atmosphere of confusion and disorientation" and "the scene was shot neither at a consulate nor in Moscow, but in a forest near Berlin" [UbuWeb, 2010].
UbuWeb [2010] Clemens von Wedemeyer. [Online]
http://www.ubu.com/film/wedemeyer_otjesd.html [19/08/2010]