discussed ways of:
a) collecting photographic data online, and
b) coding, to visualise/control the collected images.

Searches Google under a set criterion and keywords, downloads the images and then saves in a folder. Free version (WIG Light) or €20 for a version with no limits to the amount of images to download. It can also translate search phrase into other languages [WIG, 2010]. 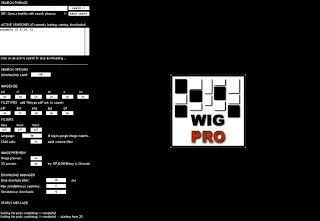 Flickr Hive Mind
Another website introduced to me was Fiveprime and its Flickr Hive Mind. Hive Mind is a "data mining tool" which allows users to sort photographic images from Flickr, that includes searching images with licenses that allow non-commercial and commercial use [Siemers, 2010].
In order to collect recently uploaded images, Autoitscript was used to refresh the Hive Mind page every 5 minutes, with the phrase "berlin wall" in the tag search box and searching under "recent". The new photos, provided they have been some photos uploaded since the previous Autoitscript search, will now be downloaded into a folder.
Image display/presentation
To manipulate/control the presentation of images, we have used Pure Data. This controls: 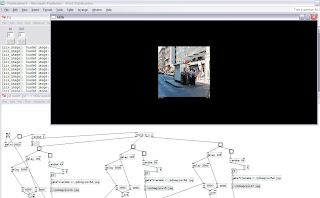