Disappointing Reunification: How the East Was Lost

The West German currency Deutsche Mark of was introduced in East Germany 20 years ago today, although "the eastern German economy is still in a sorry state, and there are no indications that the situation will change" (Neubacher & Sauga, 2010). 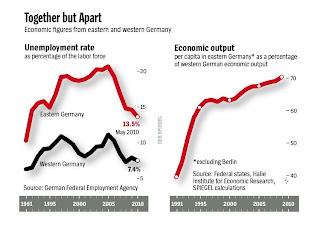 "I would have sharply increased taxes and would not have pursued reunification with borrowed funds. There is quite a bit of self-deception in the notion that now, in the year of the 20th anniversary of reunification, we are congratulating ourselves on how wonderfully everything has turned out. The facts say otherwise: the high unemployment, the depopulated areas. And the phenomenon that people call "the Wall in our minds" still exists." (Grass, 2010)