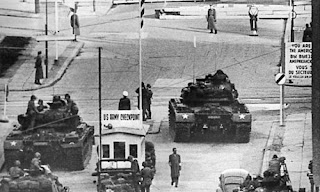 Stand off at Checkpoint Charlie in 1961 only affirmed "the Four Power status of the city," notes Colitt (2011). Military officials and diplomats of the Allies were able to cross the Wall after the hostile confrontation at the border 50 years ago, while Berlin remained divided. It takes 28 years for the Wall to open up.