The corrosion of time and being "too late" 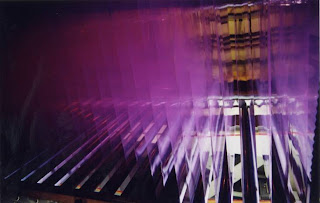 When Tacita Dean tried to film the Chalon-sur-Saône Kodak factory in France, which had stopped producing film, she was told she had come too late. "I like too late," she replied (Schama, 2011) and went on to create her work Kodak (2006) which Simon Schama describes "one of the most visually compelling of her works". Six years after Dean's Kodak, the company has filed for bankruptcy accumulating debates about film and digital media.

"While the television tower filmed in Fernsehturm owes its continued survival to its suitability for adaptation to tourism, the government building whose windows provide the screen for Palast was demolished a few years after Dean made her film. Similarly, although the Kodak factory in France continued to make X-ray film for a short time after it stopped 16mm production, its premises were demolished in December 2007 to make way for new industries." (Manchester, 2009)