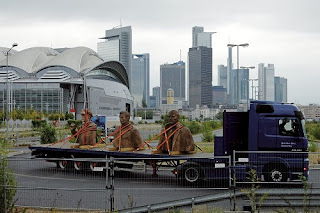 The city council in Dresden decided to remove its Lenin statue, a in a move to move away from the GDR past. In 2004, Rudolf Herz from a stonemason borrowed the decommissioned torso of Lenin and drove around Europe with two other anonymous statues. In the evening the truck would stop in cities asking artists, sociologists and economists to give their views on Lenin in the twenty-ﬁrst century. The tour was ﬁlmed and photographed.

"I am searching for images, I am exploring the life in our globalised, capitalist world, am enquiring after memories and current views of utopia... Our journey takes us through contemporary everyday life, high-tech zones, and desolate industrial areas in the East and the West. A change of locale engenders a change of references and perspectives, Prage is not Zurich, Dresden is not Rome."  (Herz, in Museum Ludwig, 2012) 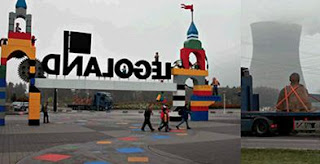