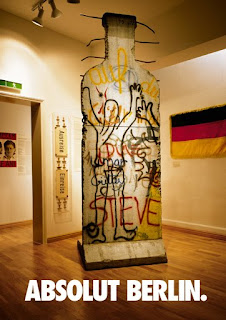 1. Purpose - selling swedish merchandise to a Berlin audience by familiarizing it to it's audience.
2. Serious audience- Definitely targets German and in particular a Berlin audience. cultural/educated/
metropolitan/mature. The age targeted could be a more young/middle-age crowd. The fact that it is
displayed in a museum allows the ad to reach more of the intellectual and historically-aware
3. Argument: connection to symbols Germans can relate to on a historical, informational, and emotional level. Relate the product, vodka, which is emotionless, with the emotions that were felt when the wall came down. Celebration and feelings of freedom were felt when the wall came down, and the ad attempts to recreate these feelings through the vodka. Jubilation. Also attempts to remove the negative stigma
typically associated with alcohol. Instead of depicting a rowdy, vulgar crowd it portrays the vodka more for socializing purposes than for the typical idea of "getting wasted."
3b. Pathos- drawing an emotional response through the portrayal of the Berlin Wall as well as a patriotic one through the German flag. (unification under one flag)
Ethos- placing the ad in a museum an attempt to relate the Swedish drink to the German audience through knowledge of German culture (flag, wall, language).
3c. triangular division of the ad with bipolar parts: first, the form of product and the wall
second, the name of product and synoymous meaning of absolut
third, the place Berlin
4. Bending and connecting two things that were not initially connected- Swedish vodka and German audience, oppression of the wall and freedom of choice. The wall no longer keeps things out.
5. Kairos- placing events in context, the knocking down of the Berlin Wall is recent, it's a current event, so it makes since to address it. Challenges cultural norms- puts alcohol into a cultivated place
like a museum, and gives it emotional and historical connection. A move towards unification, not only between East and West, but on a larger global context.
Cross-Cultural Blog (2007) The Rhetoric of Visual Ads: Absolut Berlin. [online]http://www.stanford.edu/group/ccr/blog/2007/12/the_rhetoric_of_visual_ads_abs.html [04/04/2010]
Posted by Tomo Usuda at 19:32
Labels: Absolut, adverts, Berlin Wall, Spatialised
Newer Post Older Post Home