Mikhail Gorbachev with a Louis Vuitton 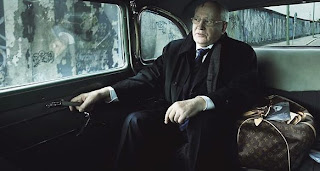 Mikhail Gorbachev drives pass the Berlin Wall, in a Louis Vuitton campaign. This photograph by Annie Leibovitz caused speculations, as the magazine headline reads "The Murder of Litvinenko: They Wanted to Give Up the Suspect for $7,000". Both Louis Vuitton and its agency Ogilvy & Mather denied the link to the case of Alexander V. Litvinenko, the former KGB spy who died after being poisoned with polonium 210 (Levin, 2007).
"Our company has absolutely no intention to pass any other messages than the one on ‘personal journeys", claimed Pietro Beccari, director of marketing at Louis Vuitton. Robert Passikoff noted "once you declare it was an overt and planned act, it has no meaning" (Levin, 2007).
Levin, D. (2007) Louis Vuitton Ad Shows Gorbachev Accompanied by Subversive Text. [online]
http://www.nytimes.com/2007/11/05/business/media/05vuitton.html [04/04/2010]
Posted by Tomo Usuda at 19:10
Labels: adverts, Berlin Wall, Louis Vuitton, Mikhail Gorbachev, New York Times, Spatialised
Newer Post Older Post Home