"The work is done for the audience. Without audience the world doesn't exist: it doesn't make any meaning."
(Abramović, in MoMA, 2010a) 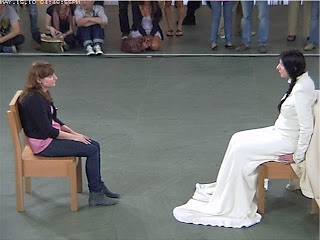 "In an endeavor to transmit the presence of the artist and make her historical performances accessible to a larger audience, the exhibition includes the first live re-performances of Abramović’s works by other people ever to be undertaken in a museum setting. In addition, a new, original work performed by Abramović will mark the longest duration of time that she has performed a single solo piece... All performances, one of which involves viewer participation, will take place throughout the entire duration of the exhibition, starting before the Museum opens each day and continuing until after it closes, to allow visitors to experience the timelessness of the works." (MoMA, 2010b)

Live between 14 March-31 May, 2010
Abramović claims that performance is a "unique form of art and is very temporary", and that "there's nothing to sell in performance: it's just memory". She also notes that she does not expect anything from the audience and "then it's up to the audience how they take it" (Abramović, in MoMA, 2010a).
As well as broadcasting Abramović's performance on its website, MoMA has also created a photostream of participants' portraits online.