"Foursquare shows a random grid of 50 pictures of users who most-recently checked in at that location — no matter what their privacy settings. When a new check-in occurs, the site includes that person’s photo somewhere in the grid." (Singel, 2010) 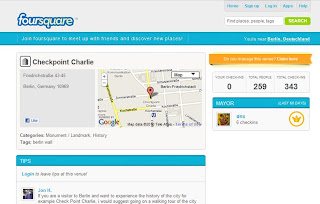 "Twitter, Facebook, MySpace and Bebo have all come before it, but Foursquare promises something new. After a decade of false dawns for the industry, it leads the way in a wave of new "geolocative" social networking tools. Unofficially, at least, 2010 has been labelled by many within the technology world as the "year of location". In addition to offering the communal connectivity of Twitter and Facebook, Foursquare also uses your smartphone's global positioning system (GPS) to broadcast your precise location to your "friends" and, should you so wish, to the wider world. Users are encouraged to "check in" on their phone whenever they arrive at a point of interest – a shop, a cafe, a museum, a nightclub, an office – so that fellow users know where they are. A great way supposedly to see if any of your friends are around and about. Glance down at your phone and – as I did with Louise – see the names of all the other users around you within a mile or so and, crucially, exactly where they are and which fellow users they are with. (I was drawn to Louise because she was in a cluster of Foursquare users – albeit still rare, even somewhere such as London – and she was the user allowing a stranger such as myself access to the most personal information – photograph, full name, Twitter feed etc.) Visit somewhere a lot and you can even vie with other users to become its virtual "mayor". If you feel so inclined, you can also leave a tip or review in the digital ether – "hey, order the bacon burger, it's great!" – so others following can benefit from your experience." (Hickman, 2010)

A tool which creates buzz in cyber culture (in this instance, by providing the users location publically) can be a threat, partly to do with uninformed users. The image below is a visualisation of Gowalla and Foursquare, illustrating user experiences also.