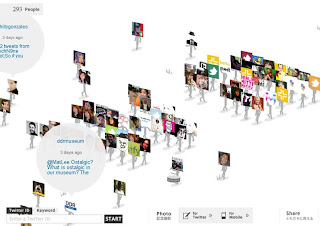 "Twitter visualisations come in many forms, but IS Parade is arguably the most inventive yet", notes Kiss (2010), where participants can start a visual parade on screen based on their Twitter ID or keyword.

"You can set up your own real-time parade by getting friends to tweet the same keyword, and then setting up a parade to follow it. Not the most fuctional Twitter tool yet, but it does draw you in. All done by a Japanese agency to promote Sharp's new IS series Android netbook/smartphone." (Kiss, 2010)

A visualisation of tweets filtered through keywords. The image above is that of "berlin wall", showing result after a search.