"No one can expect the spirit of involvement and partnership to flourish without an abundance of information available", stated Semler (1999, p.128), as he claimed that "advantages of openness and truthfulness far outweigh the disadvantages" of arguments and demands based on those information. The owner of Semco, who introduced participatory management to his company, has managed to increase production by encouraging individuals to actively engage in decision making and to determine the course of the organisation.


"I don’t feel like participating and collaboration is fundamental. But I do feel like it’s certainly one of the more exciting parts of the digital age." [Frank, in Glei, 2010]

When asked how collaboration influenced his work, Frank stated collaboration was a characteristic of creativity, even though he did not see it as crucial process. Frank also claimed that by carrying out work with others, in a mass-collaboration based on internet and his audience, he realised the opportunity "to explore this creative process that normally all happens internally, in a different way where you release work, and then you allow the frameworks that emerge from the way people respond to the work as some kind of feedback cycle" [Glei, 2010].

I have set up the picture book group based on my knowledge and experiences of collaboratively running projects at Summerhill School and other organisations: the philosophy was that every member had equal voice, information was to be open, and everyone shared responsibilities. The idea of collaboration linked well with the opening of the Berlin Wall and the unification of Germany, that a lot can be achieved when people work together, and I wanted to illustrate that people can respect individual differences and coexist. I had similar ideas to use the photographs and illustrations of the Berlin Wall to narrate a story of Berliners previously, and this was an opportunity to materialise this idea.
I began to investigate effective ways translating facts into stories, narrating it effectively and to express emotions of Berliners. The outcome of this research lead to using animals to portray human behaviour, to both enable the audience to relate and engage, and to objectify human behaviour. Bears, the Berlin mascot, was to symbolise Berliners. After discussions in December 2009 with with the author Albert Lamb, the idea of two bears, one from East and the other from West, were to meet in Berlin came about. The bear from the former-East Berlin had overslept for 20 years, and was not aware of the opening of the Berlin Wall (as in the film Good Bye Lenin!) or the German unification, and the two bears were to explore the new city without the divide, as well as having to face their new neighbours who had diverse values and opinion.
Since January 2010, I have placed file-sharing programs such as Dropbox and Google Docs to the hub of the project, as well as Skype, emails and text-messaging to establish frequent communication. To an extent, these tools have served their purpose, however, communication was not as effective as originally thought, and the project is still far from completion.
There are various elements that explain this problem. The group formed and progressed largely based on people I have worked with previous to this project, and most importantly, how well I knew them - in other words, how well I could communicate with the members. I have known Albert and Andrew for over 15 years, and brain-storming meetings I had between December 2009 and January 2010 effectively produced numerous ideas for the picture book story. I have also worked with Terry, Ting and Tink on several projects in a school community in the past, and I feel we are able to communicate. In contrast, my communication with Lee was not as fluent, even though we have been talking in class and socially, and this possibly is related to joining the already existing group that is used to working with one another [Navone, 2010]. There were frequent miscommunication between me and Lee, and I have acknowledged its impact on the rest of the group and their work throughout the process.
In retrospect, this seems like an easy mistake which could have been prevented. Throughout the course, my tutor could not have emphasised enough about communication. I was aware of the importance of communication when Lee asked me if I wanted to collaborate with him on this project. I could not have known our character or working styles, without actually going through the collaborative process with him. Some ideas Lee presented at group discussions, I had not been informed previously - I expect Lee had similar kinds of shock from ideas I had expressed. This is not to say that I expect all ideas to be consulted before being made public.

"The fall of the wall was a European earthquake, but in Washington and Moscow, miscommunication and suspicion meant the leaders were badly out of sync. While Soviet leader Mikhail Gorbachev was eager to move on cutting nuclear arsenals, President George H.W. Bush was cautious and uncertain, and a promising moment slipped away." (Hoffman, 2009)

The picture book collaboration, with its philosophy of participation, is of course different from the Cold War politics of control, but this issue of inter-personal relation is a clear symbol of miscommunication. The structure of communication was based around me. For example, a group meeting on Skype would not take place unless I organised the time and attended, and even though I had shared everyone's email and Skype contacts, communication between other members were limited [fig.1]. This caused conflict with the philosophy of sharing control and tasks, as I tried to remain an equal member of the team and chose not to assert power over other artists. 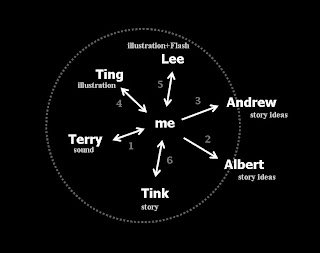 [fig.1] Group structure. The numbers show the chronicle
order of contacts that were made regarding the project.
Some of these obstacles I have mentioned can be traced to the original intention of mine to combine two projects - the picture book production and the MADA Collaborative unit - together, and its correlation: the former aims to produce and latter research and explore collaborative processes. Even though my initial idea of producing (or at least starting) a picture book through collaboration seemed a logical process, I currently see the two projects as not conflicting but of diverse nature. Through observation, I have noticed that Lee did not have the time or the opportunity to get to know other artists fully, and the project relied on communication between me and Lee. Of course, "it is always easier to identify... in retrospect than as you are living through it" (Hoffman, 2009) and I was unable to perceive such situation when Lee first talked to me about collaborating on a project in January.

"I usually try to say ‘make it as quickly and faithfully as possible.’ ‘Quickly’ and ‘faithfully’ kind of pull in opposite directions. I find that that’s a nice tension to work in – try and get it out as fast as possible, but don’t take shortcuts just for time. Try to stay true to the original concept." [Frank, in Glei, 2010]

The time element as a result of my communication issues added strain on the group, although I have decided to continue the project in the shape closer to what I originally intended outside the course. I had often spoken of coexisting with differences of opinion, however, working together with diverse characters and working styles have been difficult. This also is one of the problems of unified Germany, which has long suffered from cultural and psychological division after the opening of the Berlin Wall and the unification (MSM/CGH, 2006). A situation where "tongue-in-cheek calls for the Wall to be rebuilt come from both sides" (MSM/CGH, 2006) of the former German border illustrates that collaborative work requires time and interactive trials and errors [Welsh et al, 2010].

Verena Postweiler
An image created by Verena Postweiler illustrates how the process of German unification, attempting to combine two diverse cultures and sets of values, was rushed, with its main aim being unity itself. The result of this rapid unification is that groups that share similar values on both sides of the Iron Curtain feel mistreated and there is also growing mistrust [Welsh et al, 2010]. With their shared goals of unification being achieved, former neighbours still feel alienated from one another (Mitchell, 2000).
Weiss & Hughs (2005) claim avoiding conflicts should not be the focus of a collaborating group, but instead, manage what is natural and inevitable. Effective and productive teamwork is based on clear tools and steps that allow participants to move on, having gained from the experience of disagreements and disputes. It is an asset for groups that know how to manage it (Weiss & Hughs, 2005). The picture book project within the framework of the course is now over, and I will develop the group into a linear group to enable close and effective communication. This will lead the group back to its original form I had in mind, which will embrace the issues that the previous group encountered.
Depardon, R. (1989) The Rise and the Fall of the Berlin Wall. [online] http://www.time.com/time/photogallery/0,29307,1631993_1383237,00.html [11/03/2010]
Glei, J.K. [2010]  Ze Frank on Imaginary Audiences. [online] http://the99percent.com/articles/5923/ze-frank-on-imaginary-audiences [28/02/2010]