The cultural studies scholar Thomas Macho found the 20th anniversary of the opening of the Berlin Wall "a bit silly" (Thomas, 2010). "The dominoes, knocking them over, the musical background – it was all rather too playful" Macho criticized the event too-focused on TV audience; "The Wall wasn’t some rickety affair; it was quite solid, and many people died trying to cross it". 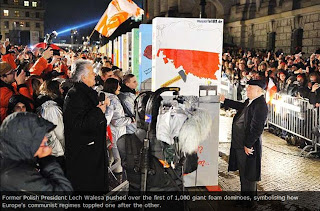 He also noted that there is a confusion about how Berlin accepts its history, and how victims of the GDR are treated.