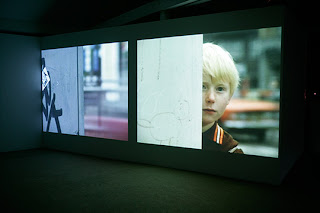 Berlin Remake (2005) is a 14 minutes long 2-channel video installation by Amie Siegel. The artist projects scenes shot by East German State Film Studio alongside "'remade' version" of the present, creating space "where chronological time becomes simultaneous and where physical and cinematic landscapes coincide in an uncanny juxtaposition of past and present, making history (like the GDR) simultaneously present and absent, dramatic and banal, ruptured and reconnected" [Siegel, 2010a].
“Approaching a film, or a film scene, like a text or musical score, as performance. To approach a cultural output— images from a national film studio—as an index of time & place. Re-making cinematic spaces, shot architectures and angles, the movements of extras. Remaking but leaving things out. The shot pulls focus through emptiness. So the performance becomes a performance of the camera, a performance of estrangement. A performance of absence. A haunting, a doubling, a replica. The historical event that usually goes unseen suddenly so close at hand. A conjunction of virtuality & presence, correspondence & contradiction. A feeling of unease.” [Siegel, 2010a] 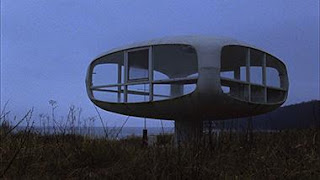 DDR/DDR (2008) is a HD, 135 minutes film with colour/sound, also by Amie Siegel, "Dream-like and propositional, works in this series mirror shared concerns of voyeurism, psychoanalysis, memory, surveillance and modernist architecture. These films engage in a self-reflexive inquiry into non-fiction film practices, including objectivity, authority and performance" [Siegel, 2010b]. It reveals "the lingering ghosts of the past to be still very much in the minds of both the older and younger generations living in the now unified nation" with interviews of former GDR citizens and survailance and training films from the Stasi archives [Harvard Film Archive, 2010].
"[DDR/DDR] is a mosaic of interviews and incidents that gradually connect, allowing issues of history, state control, personal identity, and memory to emerge. A man walking across streets and fields as if on a tightrope is a recurring motif—an apt metaphor for the East-West divide... The ruminating psychological and intellectual content of Siegel's works posits that everything is subject to shifting interpretation." [Kaufman, in Siegel, 2010b]
Harvard Film Archive [2010] Three Films by Amie Siegel. [Online] http://hcl.harvard.edu/hfa/films/2010janmar/siegel.html [09/05/2010]
Siegel, A. [2010a] Berlin Remake. [Online] http://amiesiegel.net/project/berlin_remake [09/05/2010]
Siegel, A. [2010b] DDR/DDR. [Online] http://amiesiegel.net/project/ddr_ddr [09/05/2010]