Plans for monument to German unity cause some division

THE NEW YORK TIMES
BERLIN — Plans for a monument to celebrate German unity and freedom are causing a stir 18 years after the Wall fell, with some accusing Berlin of building too many memorials and others saying the whole project is pointless.
The lower house of Parliament, the Bundestag, is to discuss the proposed monument on Friday - the 18th anniversary of the 1989 opening of the Berlin Wall, which brought an end to Communist East Germany and opened the door to German reunification less than a year later.
The winning design for the "Memorial to the Freedom and Unity of Germany" was by Bernadette Boebel, a 25-year-old student. It consists of two steel semi-circles 10 meters apart which appear as a full circle when viewed from a certain perspective.
Norbert Lammert, president of the Bundestag, said at the award ceremony for Boebel's design that a monument to post-Cold War German freedom and unity was "long overdue" in a city full of memorials recalling the Nazi and communist dictatorships.
But not everyone shares his enthusiasm.
Nikolaus Bernau, a prominent architectural expert, says a steel monument can never hope to evoke abstract concepts like freedom and unity, let alone the euphoria of the 12 months leading up to reunification in 1990.
"Based on all the experience people have with building and preserving monuments, this concept is at best naive," Bernau wrote in the Berliner Zeitung newspaper.
He said 1989 would be better remembered in celebrations, exhibitions, museums, films and other works of art.
Luc Jochimsen, cultural spokeswoman for the Left party, said the monument focuses on unification and ignores more important aspects of the 1989 revolution.
"We think Berlin is the wrong place. We think its focus should be on Leipzig, not Berlin, and on Oct. 9 (1989), not Nov. 9," she said, referring to demonstrations in the eastern city of Leipzig that marked the beginning of the end of Communist rule.
Others say Berlin already has more than enough monuments.
Within a stone's throw of the Brandenburg Gate in central Berlin are the new Holocaust Memorial, a permanent exhibition honouring Germans killed trying to cross the Wall and a monument commemorating the Soviet army's liberation of Berlin.
A new center remembering Germans and others expelled from eastern Europe after World War II is also planned.
One reason why a memorial marking German unity is under discussion may be that most traces of the Wall that separated east and west Berlin for nearly three decades are gone.
Many Germans still have mixed feelings about reunification, making the debate over the new monument even more complicated.
Klaus-Peter Schoeppner of the Emnid polling institute says the majority of Germans still think of the former Communist east as a "second class Germany."
A recent survey showed that one out of five Germans would like to have the Berlin Wall back. 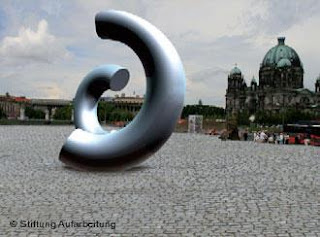