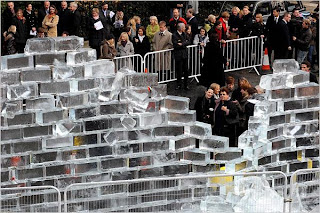 Manon Awst and Benjamin Walther began their collaboration in Berlin in 2006, with their work ranging from sculpture, performance, drawing and installation. Their backgrounds in architecture and theatre, allowing them to explore "into intimate relationships between human beings and their physical and socio-political environment", and with their "subtle yet critical approach... put society's governing values and accepted codes of behavior under scrutiny" (Awst & Walther, 2010).
"Awst & Walther's most recent work engages the architectural, temporal and metaphysical notion of a ‘threshold’. They investigate the ambiguous area between A and B (i.e: inside and outside, private and public, self and other) through a series of sculptures and interventions. This series incorporates specific industrial and ephemeral materials including gelatin, plaster and ice. The resulting objects and settings are unassuming and alluring, as they confront the viewer with an awareness of his or her own expectations and vulnerability." (Awst & Walther, 2010)
Awst, M. & Walther, B. (2010) Biography. [Online] http://www.awst-walther.com/ [09/05/2010]