I have arranged to use 2 LC15 screens, and will switch from 2 Mac Minis to a Mac Pro. The decision to switch is based on the idea of controlling 2 screens with PureData, rather than to have them run independently and risk time lags which might develop over the duration of the show. I will meet Phil about PD, once the Mac Pro arrives in his office.
I am also using an electricity cable from the wall to the column covered with a bridge to minimize risk of tripping. And 2-4 chairs.
The meeting with Nick was productive. He will take some music off and keep the sound to minimum, to pick up the subtlety of the images I have been working on, with a reference to Tacita Dean's work in Berlin.


"In constructing her narrative, Dean linked it with the passing of time, an obsession of hers; this is a meditation on the idea of transition. People arrive and leave, the waiters come and go, the sun rises and sets, the restaurant slowly changes. The visitor becomes both a spectator of and a witness to these movements, conversations and gestures." [Musée d’art de Joliette, 2011]

There an issue which I will consider based on his opinion, that  he thought the style of the track I recorded previously was not suitable to be used. 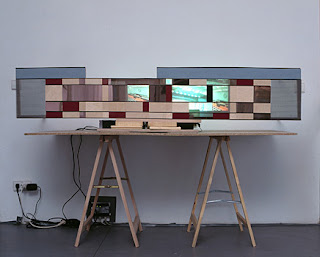 PDR - Nachbild vom Verschwinden des Palast der Republik
by Nina Fischer, Maroan el Sani
DV, video projection, colour, 1 min. loop, 2004
I am reminded, through discussions with Tom and Shaun, that my work is subtle and needs a simple display. I am struggling to decide how far I should elaborate on the column/vitrine, so that my does not sink in to the background of the room, and at the same time not overpower my clips. I hope to resolve this issue by trying out the designs in the exhibition space once I finish the clip for second screen.