The Street of Ambiguous Narratives 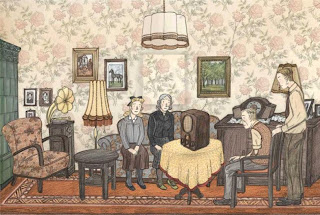 "Everyone can talk about their memories of the time and explain a bit about how things were." (Christa Holtei, in Smith, 2011)

A picture book Die Straße ("The Street") illustrates "the history of Germany's turbulent last 100 years through the prism of a single street" with a focus on the Third Reich period, as well as "when the rebuilding of Germany began" after the war (Smith, 2011). Its illustrator Gerda Raidt notes the problem of addressing such event "without directly confronting the children with the horror" and has "tried to incorporate little hints all over the pictures" - a grocery store with its window smashed and shards of glass littering the pavement, a black mourning sash hangs over a portrait of a man, a portrait of Hitler has been stashed away in the attic...

Raidt also notes "it's better if you have to ask for yourself, rather than having everything explained to you" and the prewar political developments depicted in the street scenes are intentionally ambiguous. The idea of depicting the history of the Third Reich without explaining it is a relatively new approach in Germany (Smith, 2011).