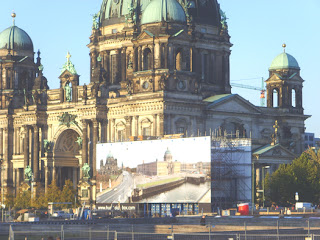 "In November 1989 the wall came down, and West and East Germans began rediscovering each other; but the socialist and capitalist cultures have been slow to merge. Since reunification Germany has been searching for new patterns of self-recognition." (Stih & Schnock, 2009)

The past is present and remains in "multiple overlays" in Berlin. The histories of buildings, sites and people have build up "multiple overlays; street names are changed overnight, structures are reshaped and reborn," they note, and that "spaces without borders" in the city cannot provide the same sense of freedom people felt arriving to the isolated West Berlin surrounded by the physical concrete barrier "that once ruled the lives of Berliners are mostly erased". This creates edifices "to retell the complex story it symbolized" (Stih & Schnock, 2009) that I see as  two sides of a coin.