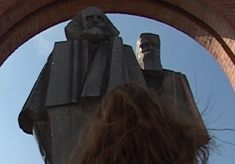 Red Tours (2010) by Joanne Richardson and David Rych focuses on statue parks, museums and theatrical re-enactments of communism - which are "not places of remembering, but ciphers of active forgetting" - in a "docu-fiction" approach with three parts and perspectives, "Red Tours seeks to question the meaning of documentary and the politics of montage" [Richardson, 2012c].

In Transit (2008) by Richardson is "a diary of a journey through space and time, made up of subjective impressions of the present and childhood memories of the past", with a reflecting monologue on "transition, the re-writing of history and the relation between images and memory" [Richardson, 2012a]. In a travelogue highlighting "the problematic nature of travel discourse and its affirmation of cultural superiority by portraying traveling to the East as a journey back in time," Letter to Moldova (2009), also by Richardson, is narrated through ten letters that reflect on the collapse of the Soviet Union, also revealing "the limits of the tourist gaze through the narrator’s own misunderstandings and inherited prejudices" [Richardson, 2012b].

The films Red Tours (in 3 sections), In Transit and Letter to Moldova are available online.