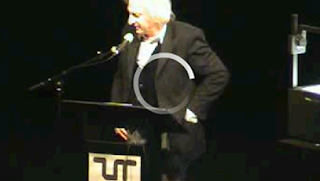 Siegfried Zielinski tells us "we can't lose time, because we never possessed it. Time is the only thing, perhaps, we can't possess. We do not have [it] - time has us". He talks about perceptions of time, melancholy and paranoia based on negative theology of time Michael Theunissen, and discusses attempts by Danny Hillas' clock "stretch the now... into eternaty" (Zielinski, 2010). He concludes that we can only "intervene in the rhythm and velocity" and organise it.