Marriage to the Wall 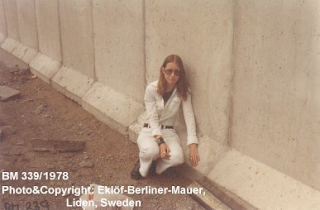 "Like every married couple, we have our ups and downs. We even made it through the terrible disaster of 9 November 1989, when my husband was subjected to frenzied attacks by a mob. But we are still as much in love as the day we met. It may not be a conventional marriage, but neither of us cares much for conventions. Ours is a story of two beings in love, our souls entwined for all eternity."