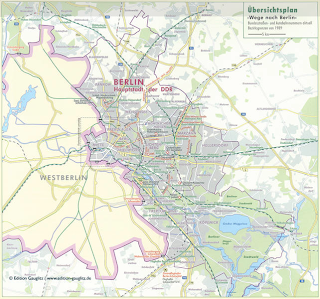 East Berlin was the capital city of the German Democratic Republic (GDR) whilst West Berlin was a territory of the Federal Republic of Germany (FRG) located in the middle of the GDR. Here, a Berlin map produced in the East largely neglects Westberlin, and similarly, a map of the West contains minimum information of East Berlin. 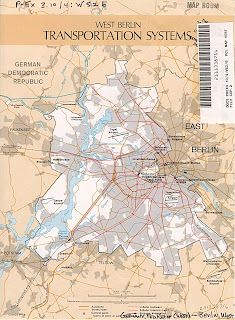 Here's a larger version of an East Berlin map.

The other side of the Wall was another country of opposing values. It was irrelevant and perhaps they chose not to see it.
Posted by Tomo Usuda at 16:27
Labels: Core Unit, FRG, GDR, map, observation, perceptions
Newer Post Older Post Home