A Day.5 in London

I arrive outside the Royal Albert Hall to see my friend's final Show at the RCA and to attend his convocation. I've known Roli and his father Albert since my time at Summerhill, and I'd also photographed Roli's project earlier. I had left Norwich on the 5:40 National Express, after an argument at the coach station taking an unpredictable turn with the driver retracting his argument, allowing an Indian family to board the coach after all. 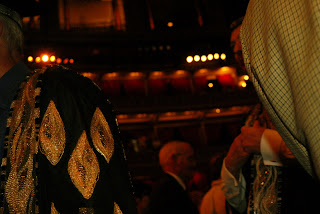 The Royal College of Art convocation ends
I meet Michael to borrow his keys at the Whitechapel Art Gallery (he had suggested to meet at this gallery the night before, and it's then I find out on the gallery website that The Berlin Wall by Lars Laumann is being shown until the weekend). When we sit in the gallery cafe I mention Eija-Riitta Berliner-Mauer, and we talk mostly about other things looking at the anarchist book store outside the window.

"In his films Norwegian artist Lars Laumann tells singular stories of obsessional fantasy and desire. The Berlin Wall, 2008, is a documentary of Eija-Riitta Berliner-Mauer, a Swedish woman who describes herself as ‘objectum-sexual, emotionally and sexually attracted to objects, things’. The film follows her story as she narrates her ongoing relationship with the Berlin Wall." [Whitechapel Gallery, 2010] 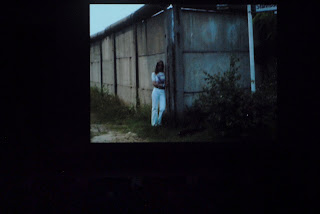 Eija-Riitta Berliner-Mauer at the Whitechapel Art Gallery
I drink a latte and eat an expensive baguette, he shoots off to catch the train to go to Summerhill, I pick up an event guide and decide to go to "Whose Map is it? New Mapping by Artists" and I take the underground to go to the Black Dog Space to see the Modern British Posters exhibition. I came here 3 weeks ago, on the day I saw the Glasnost and Exposed, without knowing the exhibition hadn't begun. I find the University of London Centre for Creative Collaboration building few metres down from the Black Dog, looking very modest. 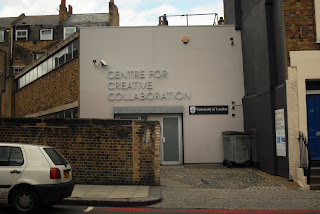 The CCC entrance
Whose Map is it? had gathered work by artists covering a wide range of issues: immigration, border policies and cultural identity. There are two analogue interactive maps where visitors are asked to stick a white dot on the location they were born in,  and to draw their route to the gallery. 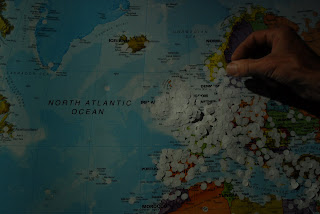 A hand from Amsterdam 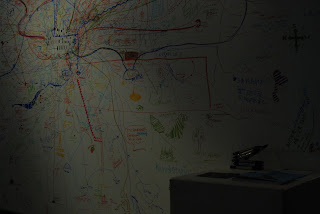 Those who travelled to the gallery
Oh, I went to the White Cube as well, to see the Marc Quinn exhibition, but the venue is boiling and there was  a TV crew who had more rights than I did. It was okay in a sense that the guy I asked my way to the gallery was the manager of the Flowers Gallery, and we had a short chat on his way back to his gallery. I visit the Flowers also, just because I was now curious about the gallery and I had some time before I met up with Mark and Kate. I've not seen them since the launch of the School & Family Works at 11 Downing Street in March. We eat Thai, they go to a theatre, and I head to Tate Britain.
This is my first visit to Tate Britain, only because of an article I read in the Guardian about Fiona Banner's commission. I feel as if I mostly watched the people interacting with her work, than her actual work. "This work is more about how people react to it, rather than a big black and white statement" she said (Brown, 2010). 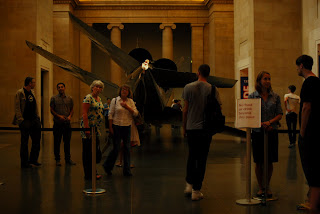 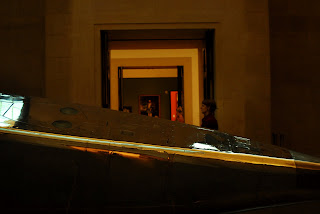 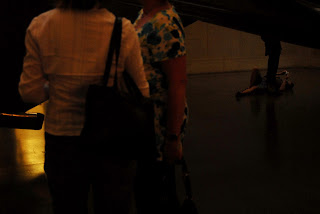 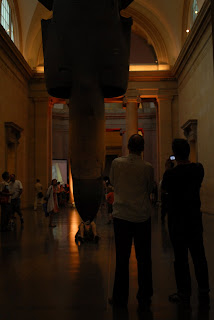 Then I head back to Michael's flat. 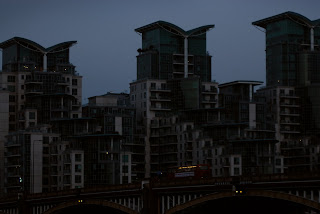 Fighting off the London transport's engineering works and suspensions the following morning, I arrive at the RCA to meet Roli again. We have a window of 25 minutes before I leave to catch my train up to Summerhill. He takes me to his work Shizaru, developed on the concept of the three wise monkeys, in which its 4 participants are made to collaborate with others. 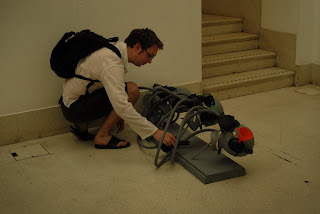 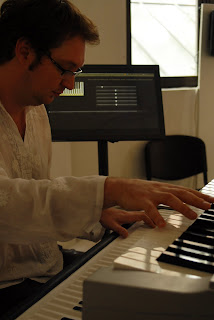