Various data visualisations by Jonathan Harris, a co-creator of We Feel Fine. Some are interactive. 10x10 updates news and categorises them into a grid of images. 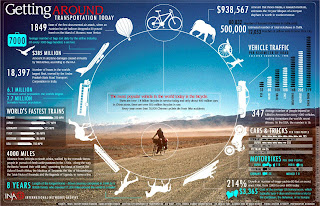 Getting Around: Transportation Today
Commissioned by the International Networks Archive (INA) at Princeton University, Jonathan Harris created Information Maps. Harris developed INA's "experimental mapping philosophy, and the way it merges data, maps and technology" which aims to develop "a new way of mapping our world, based on global transactions instead of geography" (Harris, 2009).
10x10 is a project that scans the RSS feeds of "several leading international news sources" every hour, performing "an elaborate process of weighted linguistic analysis on the text contained in their top news stories" (Harris, 2004). Without any human input, 10x10 culls news stories and automatically chooses "the hour's most important" 100 words and corresponding corresponding images. This process is repeated every day, month, and year, and from its archives can select the top 100 words for the given time period, producing "a constantly evolving record of our world... based on prominent world events" (Harris, 2004). Its interface is interactive, with a grid of the top 100 world images of that hour, ranked in order and listed corresponding top 100 words.
10x10 collects data from Reuters World News, BBC World Edition and New York Times International News, and photographs from the "aforementioned news sources" with their copyright ownership held by those sources, and is built using Perl, MySQL, PHP, and Macromedia Flash  (Harris, 2004). 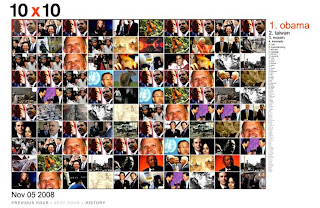 10x10 Nov 05 2008
WordCount, with data from the British National Corpus, ranks the 86,800 most frequently used English words, scaling each word "to reflect its frequency relative to the words that precede and follow it, giving a visual barometer of relevance" (Harris, 2003). The British National Corpus collects 100 million words written and spoken language and is "designed to represent an accurate cross-section of current English usage".
"WordCount was designed with a minimalist aesthetic, to let the information speak for itself" and "the goal is for the user to feel embedded in the language, sifting through words like an archaeologist through sand, awaiting the unexpected find" (Harris, 2003). Harris also notes that "observing closely ranked words tells us a great deal about our culture. For instance, 'God' is one word from 'began', two words from 'start', and six words from 'war'. Another sequence is 'america ensure oil opportunity'... As ever, the more one explores, the more is revealed" (Harris, 2003).