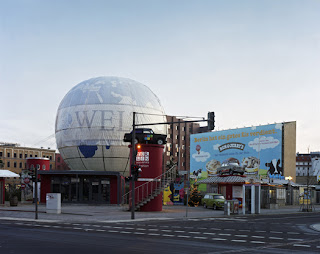 "In the sallow morning light, Berlin's makeup seems about to crumble, and a transformation happens: things, buildings, places you have seen a thousand times before appear strange and new. In a while, nothing will look the same. The urban landscapes in these photographs are mostly places in transition, waiting for their reshaping. This leaves the chance for a sequel: how will these places look in a conceivable future?" (Schirrmeister, 2010)

In a photo series Plain City, Frank Schirrmeister attempts "preserve a particular vision of Berlin... as the city reinvents itself with dizzying speed" (Schirrmeister, 2010). He scrutinizes the popular image of the city "beyond the facade, delve into the deeper layers". He has been photographing the cityscape since 2006 with a large format camera, always at dawn during weekends to capture traces of life through the emptiness.