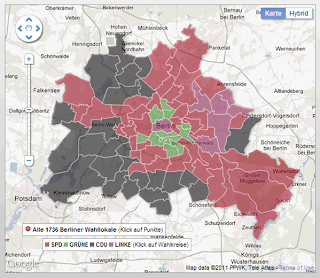 The Berlin state election result highlights the voting trend of Berliners. The Berliner Morgenpost map shows  constituencies with the most popular party: the centre-right Christian Democrats (black) are based in the West and came out first only in one constituency in the East. The Social Democrats (red) are slightly spread out. All constituencies where the Left (purple) came out first are in the East, showing its roots as the successor of the East German ruling party SED. The interactive map also shows the polling stations where individual parties performed well: The Free Democrats which lost its seats seats in the state parliament is largely a Western party, whereas the far-right NPD performed better in the Eastern parts of the city. Greens and Pirates show strong urban support. It is also possible to see that immigration is largely to the Western side of Berlin on this map. 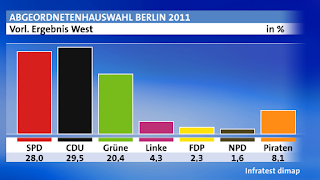 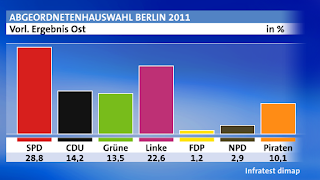 These infographics by Tagesschau also display how East and West Berliners voted. The SPD gets even support on both sides in contrast to parties such as the CDU and the Greens performing considerably better in the West. The Left picks up five times more support in the East and comes in second.

Results from the district council elections also show a similar East-West divide, although the boundaries have changed slightly since the Wall. 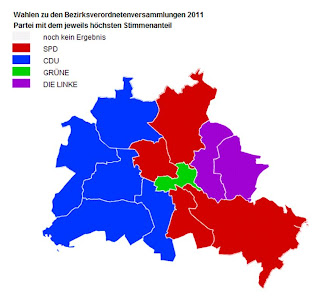