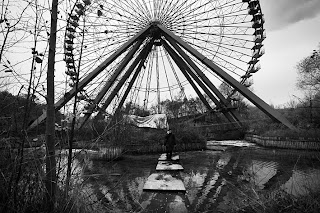 The giant Ferris wheel at Spreepark was erected in October 1989 for the 40th anniversary of the foundation of Deutsche Demokratische Republik (DDR) - a month before the Berlin Wall was breached. "The borders were opened, and the whole of West Berlin became the preferred playground of the colour-hungry East Berliners." (Alas, 2010).