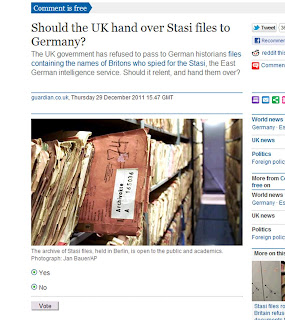 Three out of four participants of the Guardian poll said that the British government should hand over the files containing the names of Britons who spied for the Stasi to Germany. 1056 (75.8%) were in favour and 337 (24.2%) against. The poll is now closed.


The Rosenholz (Rosewood) microfilm images "contain 280,000 files giving basic information on employees of the foreign intelligence arm of the former GDR" and were obtained by the CIA shortly after the opening of the Wall. The "files relating to Stasi activity in the UK were given to MI5 by the Americans in the 1990s" and "they will be made available, unredacted, to scholars and historians" if the files are returned to Germany, disclosing British Stasi collaborators for the first time (Pidd, 2011).

"Asked by the Guardian why Britain refused to hand over the Rosenholz files, the Foreign Office, which handles press requests for MI5 and MI6, said: "We don't comment on intelligence matters." (Pidd, 2011)