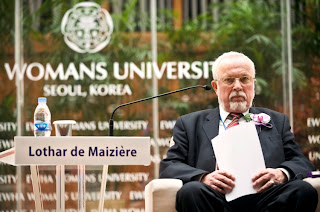 Lothar de Maizière, the last GDR prime minister, attending the Korean-German Consultation Committee on Reunification, says the South Koreans are uninterested in what the North wants.

"They say: 'It's up to us in the South to solve the unity problem. We have the money.' Well, it was no different with us. That was, of course, the German problem. Afterwards there can be a very pronounced feeling of colonization... Historical ruptures always leave behind a lost generation." (De Maizière in Gutsch, 2012a)

De Maizière also notes that "the Koreans basically don't want unity to cost too much, and I tell them it will cost much more than you can imagine."

The last GDR defense minister Rainer Eppelmann, another German delegate, says "I've realized that the South Koreans are trying to figure out a way for the North Koreans to remain in the North after unification... The South Koreans were talking about border controls. I'll be damned! They seriously intend to close the border after the wall has fallen!" Kim Chun Sig, South Korea's deputy unification minister, says "that is also a very sensitive question. Let's put it this way: Perhaps the North Koreans could remain in their homeland, yes? And we will help them" (Gutsch, 2012a).

Kim doesn't seem to know whether the North Koreans want reunification, as he claims "we have no information about this... we don't know. We only have the defectors who tell us that the conditions in the country are very poor" (Gutsch, 2012b). According to Kim, around 35% of the 19 to 40-year-olds see Korean unification as an important political issue.


"The desire to unite is continuously ebbing. South Korea's older generation has long since lost touch with friends and relatives north of the border. The younger generation has never had a chance to meet. Viewed from the South, North Korea is a distant, uninhabitable planet. It's not even possible to hop across the border for a quick look, as West German schoolchildren used to do on field trips to East Berlin." (Gutsch, 2012b)