Eve Sussman, in the flow of time

Thinking back on exhibitions at Haunch of Venison... the film whiteonwhite:algorithmicnoir by Eve Sussman is an "expedition to unravel utopian promise". The film was being edited in real time by a software from 2637 video clips, creating "the narrative through unexpected juxtapositions" of endless and never repeated scenes (Haunch of Venison London, 2011).

Sussman with Angela Christlieb created How to tell the future from the past v.2, shot during a 72 hour train journey across Central Asia. The three screen video work conceptualises passing time with "the manifestation of humanity as the constant, as daily life runs backwards and forwards simultaneously" [Haunch of Venison, 2012]. Wintergarden by Sussman and Simon Lee focus on and merges Soviet windows in 3 channel video showing the shift of time. The curator and director of HoV Nina Miall calls it "a meditation on how the current inhabitants of old Soviet housing blocks today assert their individuality... by personalizing the decaying totalitarian balconies" (Redstone, 2011). 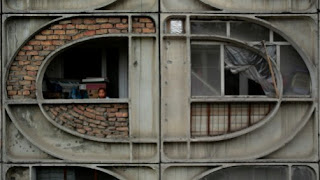