Sketches from the Less Bicknell Lecture

Sketches I made during my Core Unit lecture today. Les Bicknell presented some of his work, collaborating with residents of various communities, and above the door of the office's entrance he had painted the word "entrance" backwards. This was his perception to say that he should be out on the street (and it started up conversations too).

This linked with ideas I have about "the wall in the mind". When people say there is a psychological divide, they're referring to the cultural difference and conflict of values between  former East and West Germans (Ossies and Wessies).


"Today's East and West Germans harbor deep mutual suspicion. The stereotypes are deeply ingrained and readily conjured: "Ossis" are racist, lazy, and self-pitying, while "Wessis" are self-centered, money-obsessed, and arrogant. Statistics show that Germans from opposite sides of the former border rarely marry, and they sometimes seem to make efforts to avoid mingling socially." (Abadi, 2009)


So people are still influenced by the concepts developed under the Codl War. Do Germans compare "the other side of the wall", against their own values? Is that the wall which still searve as a boundary? So I placed some words on a physical boudary.

If the wall of ideals seperated "us" and "them"... would printing the word "entrance" backwards help people see the values on the other side? (it would be "Eingang" in German, but I didn't think of this when I sketched this picture.) 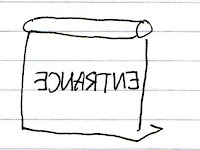 Or is the word entrance too emotionally attached to them coming over and invading their culture or communities? Should the backward text be "Ausgang" (exit)? Maybe there should be different words facing each side of the Wall. Perhaps it should be a question mark.