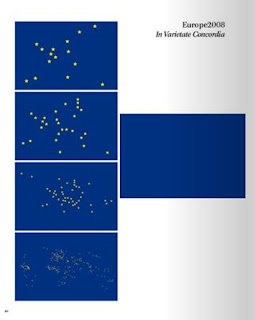 "I have designed a new European flag in which stars are no longer arranged in a circle, but according to the geographic positions of the capital cities. This creates an open sky, full of stars and without borders. Europe should present itself as unity in diversity - a varietate concordia instead of a unity of uniformity." (Eynde, in Yvi Magazine, 2007)


The new European flag was created following the 2005 referenda on European constitution, which was rejected in France and the Netherlands, and over concerns that European ideals were starting to adrift. Various institutions in Europe displayed the flag in solidarity (Yvi Magazine, 2007).

Yvi Magazine has published a book-like website, where the viewer can turn the pages by dragging the edges like turning the pages of a book [2009].