The Election Project by Simon Roberts

Simon Roberts, the official general election artist, was commissioned by the Commons Speaker’s Advisory Committee on Works of Art, to document the campaign (Parliament.uk, 2010). The photographer travelled across the country in a motorhome capturing landscape and people's interaction with the campaign. His work will be part of the House of Commons' art collection and shown online along photos taken by the public (The Election Project, 2010).

"These landscape photographs will provide a sense of context, evoking people in their diverse habitats and surroundings while conveying a wealth of visual clues and signposts to facilitate in-depth readings of the image and the complexities within." (Roberts, in Coomes, 2010) 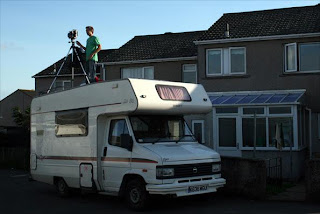 Coomes, P. (2010) Photographer chosen as the official election artist. [Online]
http://www.bbc.co.uk/blogs/photoblog/2010/03/photographer_chosen_as_the_official_election_artis.html [21/06/2010]
The Election Project (2010) Why does the upcoming General Election matter to you? Will you be influenced by the politicians canvassing in your local area? How will you vote? Indeed, will you vote? [Online] http://theelectionproject.co.uk/ [20/06/2010]
Parliament.uk (2010) Official election artist wants voters to get involved. [Online]
http://theelectionproject.co.uk/ [20/06/2010]