"Physical experience makes a much deeper impression than a purely intellectual encounter. I can explain to you what it's like to feel cold, but I can also have you feel the cold yourself through my art. My goal is to sensitize people to highly complex questions." (Eliasson, 2008)

The artist Olafur Eliasson’s comment highlight not only how the artist communicates with his audience, but also his aims about his work.  Eliasson is based in Berlin, and created The Weather Project at Tate Modern  in 2003. He also acknowledges that "there is no fixed interpretation of my works” and that his audience are free to interpret his work in their own way (Eliasson, 2008). The following is a magazine interview on the Weather Project.
SPIEGEL: Do you now know what fascinated so many people about your sun? Was it beauty?
Eliasson: Would that be so bad? I like beauty, but perhaps it means something completely different to me than to you. That's the point. 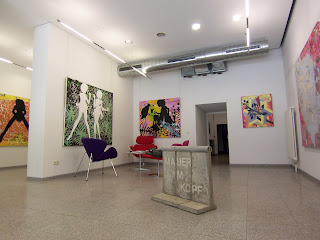 The Wall model at a gallery in Stuttgart
My intention behind creating Meanwhile was to explore diverse individual perceptions and behavior. Perceptions and values are influenced by the social environment in which people are surrounded by, and my aim was to portray conflicting emotions of Berliners regarding the construction of the Berlin Wall. I have created fictional individuals in East and West Berlin, and through their experiences expressed the conflicting opinions, often seen in the city after twenty years of reunification.
The story was based on historical fact, construction of the Berlin Wall in 1961 by the government of East Germany in an attempt to stop the mass emigration of its citizens the West. By creating the division of a city through the eyes of two individuals – a grandfather with poor health who awaits his grandson’s visit, and in the other part of the city, a teenager who fears her friends will not attend her birthday party due to their family fleeing across the border – I explored ways of highlighting how individuals with different backgrounds could experience the same event from contrasting angles.
One of the challenges I faced was to establish where Meanwhile would be best placed, and to recognise who my audience was. This was a task I have not taken on before, as my professional practices in journalism and education had fairly well-identified group of clients or audiences, and galleries and cinemas were not settings I considered my work to be in the past. My research was not only on what artists produced, but how and why their work became the piece that they are. There are numerous artists who have chosen to incorporate the Berlin Wall, or the division of Germany, into their practice. In exploring new field of my work with motion and still images, I have gained an insight of my target audience alongside identifying what field Meanwhile exists. The ideal setting I consider now is at a venue where its audience/clients have prior knowledge of modern history of Germany, thus specific venues such an auditorium in the German Embassy or the Goethe-Institut lecture hall will most likely meet the above criteria. However, the nature of the work with subtle audio feature and a clear non-open ending narrative, it is desired to be place in a facility where the audience are not distracted by noise, light or any other social variables.

"The Wall was ‘over there’ and didn’t seem to affect my day-to-day life. I was separated from that problem by an ocean, a language, my life station, imaginary country boundaries, and history. I had many walls between me and the Berlin Wall." (Tillman, 1990, p.11)

Tillman, the photographer and author of The Writings on the Wall: Peace at the Berlin Wall, notes that the Wall “communicated a message” which made him engage with what he originally thought as irrelevant to his life. His book offers “the reader the uncanny feeling of actually being in Berlin as the historic event [the opening of the Wall] unrolled” (Ferguson, in Tillman, 1990, p.9) through the graffiti he photographed. 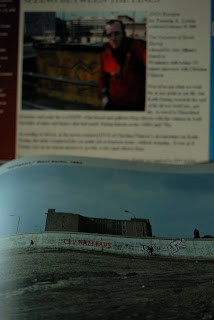 Keith Haring at Checkpoint Charlie, online, and
Jonathan Borovsky's Zeitgeist in West Berlin (1982)
in an exhibition catalogue
Artist relate to the Wall in their own unique ways, as audience do to their artworks. Koolhaas (1993) argues the wall “was not imposed on the city as constant formula” (p.220) and that it “had generated its own sideshows/paraphernalia” (p.221) on each side. He notes that West Berliners and tourists being able to approach the Wall and the Eastern side a military frontline, and he further claims that “the wall suggested that architecture’s beauty was directly proportional to its horror” (p.226); contrary to Keith Haring who used the Wall as a canvas to create a 300 metre long painting to communicate “the absurdity of the city that had been cut in half” and divided [Pospiszyl, 2010]. Borofsky also used the Wall as part of his Zeitgeist installations, claiming: “no matter how personal I get about myself, my work is going to have meaning for somebody else. It has archetypal relevance” (Borofsky, in Rosenthal & Marshall, 1884, p.176)

"Berlin of 1980s gave rise to Wim Wenders’s Wings of Desire. In this film mobility is again a key theme, yet this time restricted to insubstantial Angels who use the impossible vantage points of film to penetrate the spaces of everyday people. Floating across the city they listen to the alienation and solitude of people in the city, hearing not only speech but thoughts. The weightless mobility of the angels forms a contrast to the segregated spaces of flats and homes, the rooted repetitive life of ordinary people, the isolation and emotional divisions this causes." (Crang, 1998, p.87)

Crang (1998) also makes a reference to communities of television audiences, which may share “common message through a program” breeding collective identities among otherwise strangers in which he calls a global many-to-many interactions” (p.97)
Through identifying artists’ work in galleries or cinemas, I have become aware of unique features about those settings, and in relation it has broadened my practice. Photography has been my practice and through the process of my research and production, I have decided to incorporate sound and moving image. Artist Lærke Lauta’s video works, as well as Chris Marker’s La jetée, have provided ideas on how still and motion images could be combined, or to be differentiated; Amie Siegel’s work on how to project different perceptions and time; and Paul Cotter’s The Berlin Wall, in portraying diverse perceptions and behavior through objects and fictional settings. 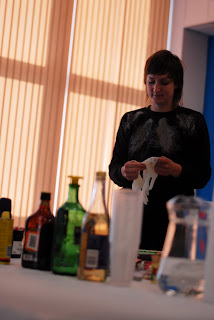 Eva Meyer-Keller prepares to kill:
at a Death is Certain venue in Norwich
I have also interviewed the artist Eva Meyer-Keller, who as well as performing internationally, curates various events. She notes that it was difficult to relate to her audience – from theatre professionals to tourists – at the former East German parliament Palast der Republik, as she was blowing balloons for her performance. She has also stated that she is aware of cultural differences in various countries she had performed, and that her Death is Certain performance has been altered slightly over time. Other artists include a Berlin based model and actor Susanne Braun, who said her role is “a puppet with a lot of Make-Up” and “very changeable” in order to suit her roles and the setting scenes.
Eliasson (2008) states “I am interested in reaching as many people as possible, and I know I will have to perform a balancing act… it will be an event” and the risk of his work being perceived as a tourist attraction. He also assesses that “this world of art and of museums can also be unbelievably elitist” even though the laws of economy still apply to artists as they do not “live in a space apart from politics and the market, and in many cases they even have very good strategies to market themselves. It would be hypocritical to claim otherwise”.

"Every project is a risk. The things that count can't be tested first. You can simulate everything on a computer, but things are different in real life, and you can't predict how audiences will react. In other words, I am someone who in fact submits to chance." (Eliasson, 2008)