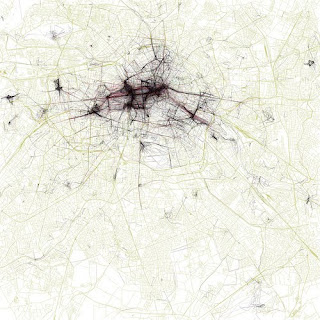 The Geotaggers' World Atlas #5: Berlin
Eric Fisher composed maps of various cities showing highly-photographed locations, a project which developed from his London map based on 73000 photographs taken from Flickr and Picassa overlaid on an OpenStreetMap (Brown, 2010, and Fisher, 2010). There are also maps which categorise photos taken by tourists from those photographed by locals (below). 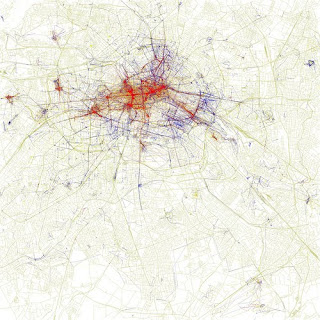 Locals and Tourists #13 (GTWA #5): Berlin
Visualisation based on geo-tagging enables locational data to illustrate people's behaviour. This work used Flickr and Picassa to collect data, then combined it with OpenStreetMap, a collectively edited online map.