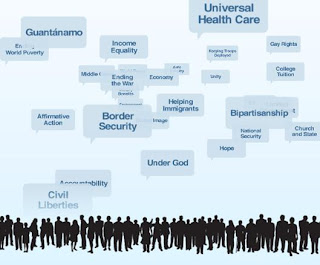 Gabriel Dance, Catrin Einhorn, Andrew Kueneman and Aron Pilhofer created a page to project over 200 interviews conducted in 14 states by the New York Times, where participants spoke of their greatest hopes for the president Barack Obama, "outside supermarkets, at parks, in restaurants". The responses are grouped in to 29 "hopes" speech bubbles, and sections can be heard by clicking on each speech bubble. The viewer/listener can agree to each comment by clicking on "I Hope So Too" (The New York Times, 2009).
Another project by the Times collected New Yorkers' "passions and problems, relationships and routines, vocations and obsessions" throughout 2009 [The New York Times, 2010].