The peaks crime in San Francisco are visualised by Doug Mccune, "converting crime figures into topology"  (McCandless, 2010). Data was retrieved from DataSF and is interpreted into 3D image by the artist (Mccune, 2010). 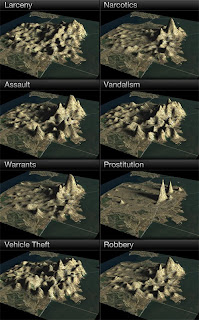