All the Presidents' Words 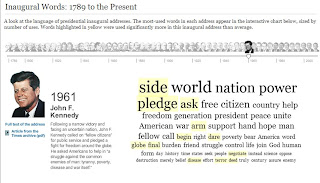 1961: John F. Kennedy
In this New York Times' chart, U.S. president's inaugural speech is broken up in to words they used. Most frequently used words appear larger in size, with words that were used significantly more than average are highlighted in yellow, which can also be traced back to the original context of the speech (The New York Times, 2009). The images below are from are from George W. Bush's 2005 speech.

freedom freedom freedom Freedom freedom in context
In another New York Times interactive chart, Jonathan Corum and Farhana Hossain visualise the amount of U.S. presidential candidates' names used by their opponents, leading up to the Iowa caucuses, with lines connecting the speaker and the named (Corum & Hossain, 2007). 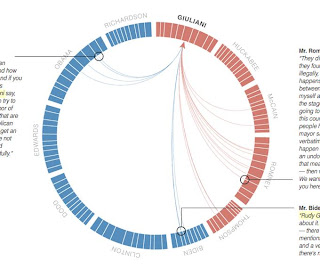