Border cities like Ciudad Juaréz, Mexico, and El Paso, Texas, illustrate different city patterns side-by-side, suggesting cultural influences on the development and growth of cities and infrastructure. Ciudad Juaréz, supports at least 1,300,000 people. On the U.S. side of the Rio Grande, El Paso is marked by the brightly-lit Interstate Highway I-10 that cuts across the city. Although the area of El Paso, with an estimated population of slightly more than 600,000 is roughly on the order of the area of built-up Ciudad Juaréz, the density of settlement evidenced by the distribution of lights, is much less. (Evans & Stefanov, 2008) 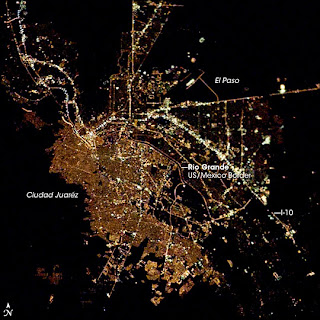 NASA and NOAA (National Oceanic and Atmospheric Administration) created "the first world map of the nighttime Earth" (Evans & Stefanov, 2008), using data collected by the Defense Meteorological Satellite Program satellite from an altitude of 830 kilometers above Earth, over 9 months. The Korean peninsula is clearly divided into South and North in the night; with lights in the capitalist Korean Republic covering up the entire Southern end of the peninsula, while its neighbour, Democratic People's Republic of Korea, remain mostly unlit.