"The longest stretch of the Berlin Wall in the world, outside of Berlin" (a voice, in Brian1979d, 2009) was constructed in Los Angeles for the 20th anniversary of the opening of the Wall. The event was organised by the Wende Museum to honour "the cultural and historical implications of the fall of the Wall" including Thierry Noir, who was one of the first artists to paint on the Berlin Wall in 1984, and Shepard Fairey, whose "HOPE" portrait of Barack Obama became an "iconic image and helped inspire an unprecedented political movement" [The Wende Museum, 2010]. 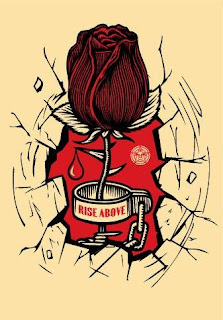 Shepard Fairey for The Wall Project

"The two sides of the Berlin Wall segment that stands outside the Wende Museum in Culver City speak volumes. The side that once faced West Berlin is painted with colorfully interlocking cartoon faces by Thierry Noir, a French artist, but the other side, which the East would have seen, is dull gray concrete. It's a tidy encapsulation of the polarities of the wall." (Cheng, 2007)