Sam Taylor-Wood, Travesty of a Mockery and Third Party

Travesty of a Mockery (1995), is a 10 minute film by Sam Taylor-Wood - who frequently uses film and photography to illustrate psychological/emotional states - portraying a man and a woman having an argument, "enacted simultaneously on two separate projected screens... each participant is isolated within his and her own screen, the borders from one to the other being crossed by thrown objects such as a glass of milk or a frying pan and, occasionally, by one of the participants, who, unable to contain their rage, launches an attack across the divide. A soundtrack of tuning into a series of different radio stations accompanies the film, seeming to articulate the switching emotional tenor of the scenario as it moves through confusion, anger, sadness and resignation" [White Cube, 2010]. 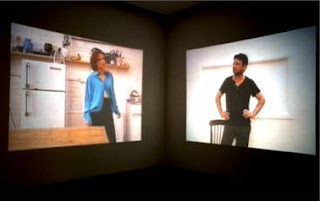 Travesty of a Mockery

"This is one of several works in which Taylor-Wood locates her subjects in emotionally heightened or distressing situations, and then monitors their responses." [White Cube, 2010] 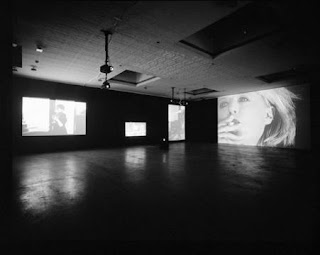