Tacita Dean, Fernsehturm (two stills), 2001:
16MM color anamorphic film, optical sound, 44 minutes.
As Searle (2001) visited an exhibition by Tacita Dean, he became "supremely, and sometimes excruciatingly, aware of time. How long can you look, stay mesmerised, picking up the details?" He notes that "it takes about two and a half hours to watch the entirety of Dean's films" and another half an hour to listen to her audio tape of her journey in search of the Spiral Jetty" sitting on an uncomfortable corner bench, and questions, "well, how much time have you got?"
The following is an excerpt of Searle's article:

Fernsehturm, her latest work, is a 44-minute film set in the revolving cafe of the east Berlin television tower, completed in 1969 on Alexanderplatz. For years, east Berliners and tourists could visit the Telecafe to watch the divided city turn below them, as they drank their warm advocaat (this being the only thing on offer, according to one friend who visited before the Wall came down). For much of the movie, the camera is static, looking across an arc of the cafe, with its stuffy atmosphere, the fiddly details, the slanted, light-filled windows. We watch the light play across the room as we slowly sweep the city.

But Dean doesn't really give us a view of Berlin, so much as of Berliners coming and going, looking at the view, minding their manners. Dust motes and smoke, beer glasses and gold-chromed light fittings catch the ever-changing light. Sometimes the camera takes a stroll past a waiter's galley, peeking through a grille that partitions off the doors to the toilets. And then it is night, with an organist ruining The Girl From Ipanema and a Strauss waltz on his once ultra-modern keyboard. Then the shutters go down, the lights go up, and we are in a wretched centrifugal room churning through history.

The square on which the TV tower sits was immortalised in Alfred Döblin's novel Berlin Alexanderplatz, which was later filmed by Fassbinder. Even the novel is written as though it were a movie - short chapters, brief scenes, clockwork motivations and action. Dean's single, widescreen film almost preserves strict unities of time and place. You are here, the film tells us. But we are also in a kind of clockwork world, the shadows ratcheting round, like the frames of a film clicking through the projector's gate. The room is a clock, a camera, a projector, a world within worlds. The human activity is desultory, banal, ritualised in cafe time, drinks time, dinner time. Glasses are raised, heads nod, hair haloed in tobacco light.

Long and uneventful though it at first seems, Fernsehturm is Dean's most accomplished work to date. In fact, I believe it is a masterpiece, in an age when even the mention of the word makes toes curl. Yet the possibility of such consummate artworks still exists. They sneak out from their prisons of style and intention, loaded with more than the stamp of familiar destinations in their passports. They are stateless. They won't lie down, they are not compliant. We are in Germany, we are here. What goes around comes around.

"Dean can eat your day", writes Searle (2001), and concludes, "we are rarely asked to give any art so much time. How long can you look at a painting or a sculpture? I remind myself that it takes even longer to read a novel. Art takes the time it needs". 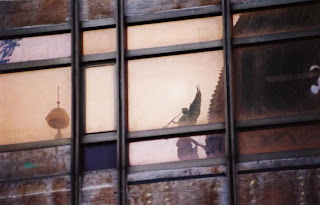 The Fernsehturm Tower was built between 1965 and 1969, in the former GDR. It is a revolving sphere in space that somehow retains something of the optimism of the 1960s. You can see it from anywhere in Berlin, and from the aeroplane when you land. It's a real landmark. It always changes with the weather: when the sun shines it catches the light and projects a huge cross, called the Pope's Revenge - ironically pointing towards the west - and when the weather is cloudy, it becomes a stem that disappears into the sky. Inside there is a revolving restaurant, which was sped up after the fall of the Wall: it used to take an hour to do a full rotation of the view, and now it takes half an hour. It's a beautiful allegory of progress - the speeding-up for capitalism.

I visited the Potsdamer Platz in 1987, when it was just a wasteland. It was a huge architectural opportunity to regenerate a large part of central Berlin, which has been completely wasted. They brought in lots of top architects, including Renzo Piano, but it hasn't worked at all. Everything is very ugly. It looks extremely corporate, with towering buildings. Even the cafes and restaurants don't work very well.


A leading artist of her generation, Dean works in a variety of media including prints and drawings but most notably film and sound. She is fascinated by the close relationship between film, the passing of time and the possibilities they present in the construction of narrative.

Exploring Berlin, her films sensitively capture the complex histories imbued in the material culture and architecture of this formerly divided city and its people. Evocative, melancholy and mysterious, her work suggests a personal experience wrapped up in the larger rhythms of history. The first presentation of her work in a public gallery in the UK since 2001, this exhibition includes her first major Berlin work Fernsehturm 2001. An atmospheric film made in the revolving restaurant of former East Berlin's famous Television Tower, Fernsehturm captures the changing atmosphere of this landmark place as day turns to night, revealing shifting perspectives of locality, social history and politics. 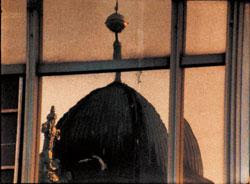 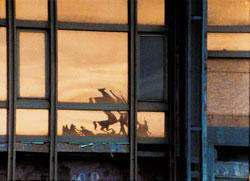 Shown at the Venice Biennale this year, in her latest film Dean reflects Berlin's divided history in the jaded façade of the once iconic Palast, the government building of the former German Democratic Republic.

And an excerpt from Winterson's (2005) article, about Dean's work, space and time:


"Everything that excites me no longer functions in its own time. I court anachronism - things that were once futuristic but are now out of date," she says.

In the communist part of Berlin, a revolving cafeteria allowed diners exactly an hour to eat cream buns and drink tea while watching a 360-degree panorama of their city, looking out towards the forbidden Berlin of the West. The Fernsehturm resembles a lighthouse or the prow of a ship. It is a relic of a particular regime, a particular time. It is marooned in its own past, and it beams out futuristically across the skyline. Like so much else, what was once a symbol has become a tourist attraction, and, significantly, a full rotation has been sped up from one hour to just 30 minutes.

Life has moved on. There is no wall, no GDR, but though the Fernsehturm can turn faster, it can only be caught at its own pace. In 2001, a year after she went to live in Berlin, Tacita Dean made the interior of the Fernsehturm into a 44-minute film - in which nothing happens. Unlike other film artists, such as Bill Viola or Billy Innocent, Dean is the genius of Nothing. Nothing needs a capital letter, because it is a Sartre Nothing, or a Beckett Nothing.

Her genius, with her slow, steady, held frames, is to allow the viewer to dream the Fernsehturm; to enter it without hurry, without expectation, and to accept, as we do in a dream, a different experience of time, and a different relationship to everyday objects. The glasses, the cutlery, the windows, the light, the shapes of people, the geometry of the tables ask, through the medium of the film, to be noticed, and to be understood. Time slows, then slips its loop altogether. The restaurant revolves, but we are outside of time - observers in space, with a weightlessness that contrasts to the solidity of what we are asked to observe.

I have watched people watching this film - one of her longest - and some walk away quickly, some lie down and have a snooze, some surrender themselves to the intensity of the experience. Others watch half of it, then complain bitterly in the cafe, because they waited and waited, and nothing happened. But climbing out of the nothing, like shy creatures, trodden-on and overlooked, is the curious life of objects freed from their everyday imprisonment. We understand that when Cézanne paints an apple, or Vermeer a milk jug, it is as though we had never seen these objects before.

On film, which has become the medium of action, contemplation is anathema. Yet when film allows a moment to unfold in real time, we realise that a moment is agonisingly long and that our perception of time is both subjective and approximate.

Dean can draw beautifully, and some of her drawings will be on show at the Tate, but 16mm film is her preferred medium because she is attracted to its relationship with time. She likes the beginning, middle and end that film allows, but far from reaching for a conventional narrative, she uses the time-line of the film to release her subject into its timeless state.

One of her new short films, PIE, is eight minutes of magpies in the trees outside her window in Berlin. Their restless squawking and hopping gives no sense of time passing, or of any purpose but their unplanned choreography becomes a dance of life - life that can only be found in the moment, but which depends on the illusion that the moment will last forever.

"I do not think I am slowing down time, but I am demanding people's time," she says. In a busy world, that is a big demand, but one of the many reasons why art matters is its ability to stop the rush. Art on film makes us conscious of the time and space we occupy, and give us an insight into the nature of time itself.

Dean takes great care with her film soundtracks, but her sound-alone installations open a world where hearing becomes our only radar. She turns us into bats or moles, dependent on just one of our senses, and that sense heightened to a painful acuteness.

There is discomfort in Dean's work - and no getting away from it, except by refusing it the time or the concentration. If you want a quick fix, she will seem superficial; you can't just pop in and have a look, as you can, say, with Damien's shark or Tracey's bed, or the Mona Lisa. The films and the sound installations need something of surrender to get the best out of them, and the gallery space is ideal for this. Although when she projected her Sound Mirrors on the wall of the National Theatre in 1999, it was a spectacular success, perhaps because the theatre is a dedicated building and her work has a sense of the sacred, and the dedictated.