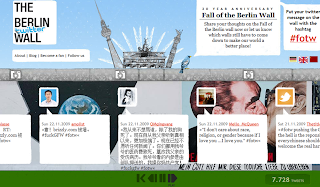 Digital media is playing an important part of the 20th anniversary of the Berlin Wall's opening (Bunz, 2009). As well as websites with historical and narrative footage, people can "share your thoughts on the historic Fall of the Wall and post a wish for the future" at the Berlin Twitter Wall, a project run by Kulturprojekte Berlin as part of the 20th anniversary of the opening of the Wall [The Berlin Twitter Wall, 2009]. The project also focuses on "which walls still have to come down to make our wold a better place" and allows 5 posts daily to prevent spam (Bunz, 2009).

Bunz, M. (2009) The Fall of the Berlin Wall in Digital Media. [online]  http://www.guardian.co.uk/media/pda/2009/nov/09/fall-of-berlin-wall-digital-media-social-networks