These are similar to the ideas I have about projecting texts onto the Wall. This is a Wordle image of John F.Kennedy's 1963 speech, where he claimed:


"All free men, wherever they may live, are citizens of Berlin, and, therefore, as a free man, I take pride in the words 'Ich bin ein Berliner'" (BBC, 2003). 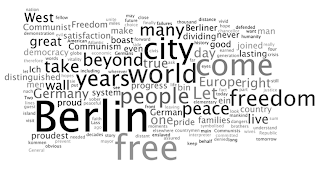 Wordle is a website where it translates texts into "word clouds". Words that are frequently used are represented bigger than the ones less used (Wordle, 2009). The image below is created from the 1987 speech by Ronald Reagan, where he called "Mr. Gorbachev, tear down this wall" (American Rhetoric, 2009).

Little has changed over 24 years: Berlin, city and freedom are the key words regularly used. Both presidents were also criticized for being too confrontational, although some claim they were ahead of their time (Dolan, 2009, and Mann, 2009). This following is a prepared speech of senator Barack Obama, when he visited Berlin during his presidential campaign in 2008. The words world, people and Berlin are most frequently used. 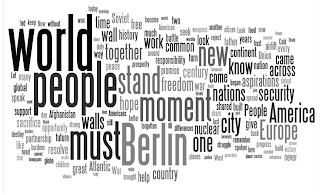