The Wall Under Starlight

"On the night of 12 August 1961, armed units of Communist police and militiamen began cordoning off the eastern sectors of Berlin with barbed wire, and started reinforcing the divide with hastily erected breezeblock barriers." (Paterson, 2006).

On the following night, West Berliners marched in protest with torches made by newspaper and magazines, singing the German anthem (Times, 1961). This was the beginning of the Berlin Wall, the concrete and barbed wire Cold War barrier that divided Germany's biggest city for 28 years until its fall in the winter of 1989. The Wall divided East and West Berlin and Berliners' lives until it was opened up on 9 November, also in the night. 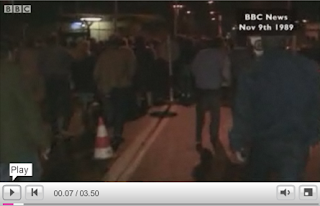 20 years on, a BBC correspondent Brian Hanrahan recalls the night he was reporting from Berlin:


"A day before, we would have been shot for being here - now people were knocking off pieces to take home as a souvenir of an unforgettable night... Just as I finished describing the scene to the camera, I heard somebody behind me say: 'I want to be an astronaut.'