The first one is 256², "an intervention in Public Space" (Bartholl, 2007),  Bartholl marks the outline of the virtual NewBerlin in Second Life in physical space at Alexanderplatz Berlin: the idea was "to make the first Sim of Second Life's NewBerlin visible in real life Public Space at Alexanderplatz Berlin". Bartholl, with 64 pieces of plain chalk drew the 256 × 256 meter square. The line of chalk, representing the virtual copy of Alexanderplatz crossed a McDonalds, a Church, two housing blocks, a trainstation and a mall, among other objects and surfaces.

The second project is Map.


"Transferred to physical space the map marker questions the relation of the digital information space to every day life public city space. In which way will location related data from the net become ‘visible’ in physical space? How is reality and truth balanced between the physical world and the net data space?" (Bartholl, 2006) 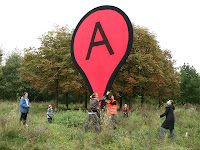